WWF No Mercy is a professional wrestling video game released in 2000 on the Nintendo 64 console and published by THQ. It is named after the World Wrestling Federation annual pay-per-view event of the same name. No Mercy is the follow-up to 1999's WWF WrestleMania 2000, and the last WWF game released for the Nintendo 64. No Mercy was well received by players and critics alike.[1] It is the Nintendo 64 exclusive sequel to the critically acclaimed (in the wrestling games community), WWF Wrestlemania 2000. The WWE Day of Reckoninggames use the same grappling engine as this game, as does the EA Def Jam games (which is also developed by AKI). It is still considered to be one of the best American wrestling games, and an N64 classic..[2]

The game was named after the WWF No Mercy 2000 Pay-per-View in which Edge & Christian faced The Hardy Boyz in a violent tag team ladder match. This made the ladder match feature a big selling point of the game. A PlayStation and Game Boy Color versions were planned but it was cancelled due to difficulty in the porting process.[2]

Some of the features included in WrestleMania 2000 were removed from No Mercy. First, wrestlers' entrances were cut short to showing the wrestler only appear on the stage/entrance ramp, and players never see wrestlers actually enter the ring (despite early screen shots showing full ring entrances). For example, Triple H is shown spitting water at the crowd upon entering the ring. The belt options were also changed; rather than creating a belt from scratch, players now have to complete a story mode to win a title.[1]

However, No Mercy features a much more extensive Create-a-Wrestler mode with more moves, more customizable body attributes, better-organized clothing options (No Mercy utilizes descriptive categories and titles for each clothing item, whereas WrestleMania 2000 simply numbers items), and the ability to create female wrestlers, which is nearly impossible in WrestleMania 2000. Each wrestler in the game has four different ring attires that could be independently edited, and each attire can be completely changed including name, height and weight, body parts, and music, technically allowing four different wrestlers per slot, although they must share a common moveset. Several of the game's unlockable wrestlers used this feature, such as Taka Michinoku who has his partner Funaki in two attire slots. The graphics also were improved significantly over the game's predecessor, and various match types made their Nintendo 64 debut in this game, including ladder matches and special referee matches. The game also marked the first time on the system in a WWF game that players could fight backstage and also the first time moves can be done on the announcer's table. Many parts of the backstage environment are usable, such as being able to hit the opponent with a pool stick and driving them through the pool table in the bar/lounge.[1]

The story mode is more extensive, compared to WrestleMania's career mode. Each WWF title features a unique story. For the WWF Championship, players can choose any wrestler to reenact the classic feud between Mankind and Triple H that dominated the WWF in early to mid-2000. Other angles include Stone Cold Steve Austin's feud and The Rock's temporary alliance with Vince McMahon. After winning a title, the player can replay the story mode and defend the newly acquired belt in a variety of new storylines. Also, unlike future wrestling games, players are allowed to fight for and defend any championship in the exhibition mode.[1]

The story mode's depth is due in part to its branching storylines that develop based on the outcomes of the player's matches. In WrestleMania 2000, if the player lost a match in the career mode, the game only allowed the player to retry the match, rather than adjusting the storyline accordingly. No Mercy's story mode offers branching storylines based on the outcomes of matches. The player has to actually play through each story several times and lose matches in order to achieve a 100% completion rating.[1]

Another notable feature that was added to the game is the "SmackDown! Mall." With money earned from winning matches in story mode and playing the Survival mode, players can purchase unlockable characters, clothing, wrestling moves, props, tattoos, weapons, and venues.[1]

The game uses the same grappling system. It improves upon the original game with an expanded story mode, better graphics, a bigger roster, an expanded create-a-wrestler mode and more weapon possibilities. One of the most praised aspects of the engine, the ability to injure specific body parts by working on it the whole match, remained intact. Some of the games better features are still absent in current generation games.[2]

In addition to the basic strong grapple/weak grapple system seen in WWF Wrestlemania 2000, there is now a new "Running grapple" that can be used to add even more moves to the moveset. Weapons are also much more interesting to use. Instead of magically shimmying to the side whenever a move is done near them, weapons, for the most part, stay in place, allowing you to actually do moves onto them. It does no extra damage, but it does create a nice extra smashing sound (or ringing sound if using the ring bell) to satisfy.[2] 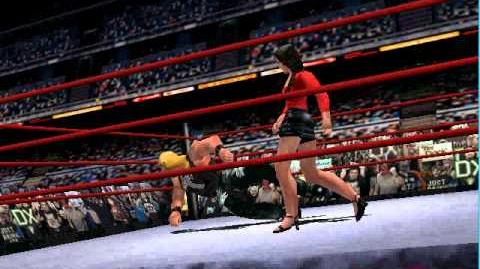 When No Mercy first hit the shelves their was a glitch/save error in which the whole game data could be simply wiped without notice and restored to the default original set up.

In around March 2001 this issue was fixed in the cartridge and would be fully able to work and anyone who had previously bought the game was able to swap their damaged cartridge for the now fixed version with no fee.

Community content is available under CC-BY-SA unless otherwise noted.
Advertisement